And If That MockingBird Don't Sing.... 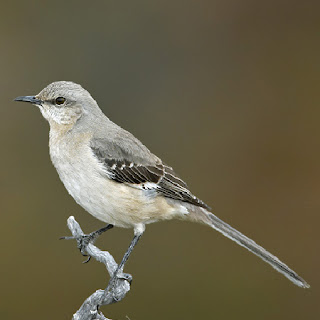 
Remember that song?  Well I am here to say...the Mockingbird that lives in our backyard.....Sings and sings and sings....If you want to hear what he sounds like, click on the Mockingbird name under the picture....
I did say HE because apparently during the mating season the male will mark his territory with song. You will see them singing incessantly, both night and day, hopping from one song post to another.   Our Mockingbird starts his mating season in early February....around midnight!

"The Northern Mockingbird, the most well known representative of this family above the equator, is known scientifically as Mimus polyglottos, which comes from the Greek “mimus” to mimic, and “ployglottos” for many-tongued. The song of the mockingbird is actually a medley of the calls of many other birds. Each imitation is repeated two or three times before another song is initiated. A given bird may have 30, 40 or even 200 songs in its repertoire, including other bird songs, insect and amphibian sounds, and even the occasional mechanical noise."

"Northern Mockingbird males establish a nesting territory in early February. If a female enters his territory, the male will pursue the female with initial aggressive calls and, if she becomes uninterested, with softer calls. Once the pair is established, their song becomes more gentle. Northern Mockingbirds tend to be monogamous, and the female may return to the same male from the previous season.
Both the male and female Northern Mockingbird are involved in the nest building. The male does most of the work while the female perches on the shrub or tree where the nest is being built to watch for predators. The nest is built approximately 3 to 10 feet above the ground. The outer part of the nest is composed of twigs while the inner part is lined with grasses, dead leaves, moss or artificial fibers. The eggs are a light blue or greenish color and speckled with dots.    Approximately three to five eggs are laid by the female, and she incubates them for nearly two weeks. Once the eggs are hatched, both the male and female feed the chicks." 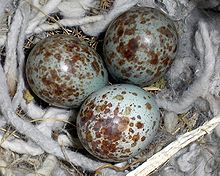 The  Mockingbirds have returned to our yard for many years.   Last year we saw the nest, sheltering 3 little eggs, in a bush at the back of our yard,  once the eggs  hatched and the birds were gone the small nest fell from its spot onto the grass below.  Because he knows me so well,  my husband brought it to me and it is now on display in my home, along with a few other nests we have found.  (We never disturb a nest in a tree, only rescuing  the ones that have fallen to the ground.

I do love our Mockingbirds and enjoy falling asleep to their wonderful repertoire of songs and calls, it is oddly soothing....at least to me :) 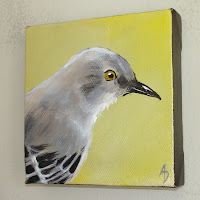 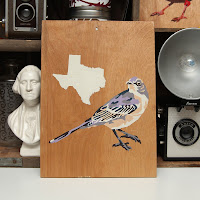 
Maybe someday you will have a Mockingbird living in your yard....if your lucky!
(click on the highlighted words and shop names to be taken to the shops and the info pages)
VE
Posted by A Collective Journal at 3:12 AM

Interesting post VE. I never knew why they were called mocking birds.

I had a mocking bird in my yard once, but I don't remember enjoying it quite as much as you do. :0)

Very interesting. We have lots of birds around here, some sing, but I would never be able to tell what kind of bird they were. I love to hear them early in the morning when it's still cool outside.

If you click on the word mockingbird under the top picture you will hear the mockingbirds song...or songs....

Interesting post, and thanks for including my little painting!

How cool to have the nest where you could actually see it. It looks as though there may be some thread scraps, or orts in that nest.
Great post.
:)

The one we have around here doesn't sing pretty, he makes loud, annoying noises. I bet he wonders why he can't find a mate!

Thanks so much for including my paint by number! I love mockingbirds!