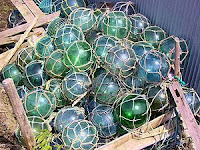 These have held a fascination for me for years. My Grandmother had a couple of these (without the netting)
They always looked so pretty hanging by the windows. Over the years I have managed to pick up a couple of them for myself. I found a few that actually have the netting still on them.
They were once used by fishermen in many parts of the world to keep their nets afloat. Norway was the first country to start production and use of glass fishing floats around 1840.
By then, glass had replaced wood or cork throughout much of Europe, Russia, North American, and Japan.
The earliest floats, including most Japanese glass fishing floats, were handmade by a glassblower.
(http://en.wikipedia.org/wiki/Glass_float)
These glass floats are no longer being used by fishermen, but many of them are still afloat in the world's oceans.
I think it is fascinating that there are many of these are still out floating around. They can even be found washed up on beaches. 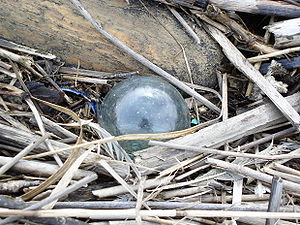 The most common colors were the blues and greens, however clear, amber and amethyst ones were also made. The most highly sought after and rare ones are cranberry or red colored floats.
Most of the colored floats available today are replicas, but still fun to have.
This one has the makers mark on it.
They do not have pontil marks. They were blown and then removed from the blowpipe and sealed with a molten glass button before being placed in the coolers.

This small float has wear from the elements and one can see where the netting used to be.

A beautiful amber colored float
Here is a modern hand blown set;
So if you happen to go walking along the beach, keep your eyes open, you never know what you may find.

That is so cool! To think there are some still floating in the oceans just amazes me.
Why did I never find any washed ashore? So if I come across a glass ball in my picking I should look for an indent and a makers mark?

A lot of them did not have maker's marks.
But if you find some they can have wear and look a little dull from the elements and being washed up on the beach.
Look for the glass button instead of a pontil.
LOL, I never found any on the beach either, but you might have a better chance on the Pacific side...

Very cool!
I have an old one with the netting still on...it was a bd gift from my hubby...I love it!!

These are so cool! I've bought a few from VE for my son. He is totally fascinated with the glass floats and has a small collection going.

I want some for myself now!

A couple of years ago floats from Alaskan waters washed up on the beach in Oregon, they were mostly the coke bottle colored ones, you can find them at the antique shows and shops in that area today.
A friend wrote a book about them...
"Glass Fishing Floats of The World" by Farnsworth and Rammer.