Mosaic boxes, planters or whatever you want to call them.

I have the attention span of a gnat so I get an idea and am not satisfied until I run like a bat out of hell to gather everything I need to make it, and then I let it sit for a month or so until I actually can focus long enough to do it.

Such is the case with these funky boxes. I had the idea, figured I knew what I'd need so don't bother researching, ran back to work, made some boxes out of wood and eventually got around to doing some. 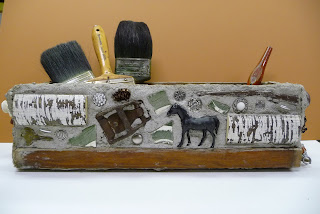 I just take whatever bits and pieces of things I can find, including some "bad choices" in thrifting.  I first bought a bag of cement to do it and it wasn't the look I wanted, too rough.  So then I went and bought a bag of brick mortar, and that fell right off the side of the box when it dried. (insert *sigh*) So then I went back AGAIN and bought a bag of thin-set mortar after talking to 3 guys at Lowe's about what I was doing. That was the look I wanted yet I found it also tends to fall off after drying . (insert bigger *sigh*)  Thankfully, it would fall off as a whole side piece so I'd just glue it back on.  I know now what I need to do ~ I just haven't mustered the enthusiasm to do it again. Plus I got distracted. :)


Christmas box ~ this one I did on an old drawer that still had the handle on one side. It looked cool. Sold. 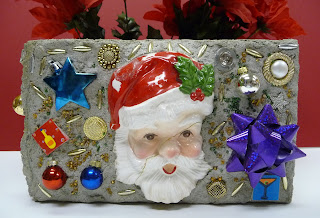 Who knew? Peggy, these are wonderful, why have you kept them a secret from us?

Nice job and thanks for stepping up to the plate with today's post!

You are so full of talent and surprises! I would call these "free style" mosaics and they are wonderful.

Yes, you should always take pictures of your work. :0)

You seem to share my problem, once you figure out how to do something it isn't fun anymore...I guess that means we are "problem solvers"....LOL!

The 2 you showed us are wonderful!

I love these boxes and you can have so much fun with them!