I don't know about the rest of you, but I have been so tired of hearing bad news that I have stopped watching the news, reading the paper and started not feeling bad when I hang up on solicitors that won't listen to me.
By no means do I bury my head in the sand. I own a business and know how bad it is right now, but I figure if it's meant to be heard by my ears it will find it's way to me ~ and it does.
Some days I can feel it dragging me down mentally and physically ~ I get lethargic, stand there in confusion with what to do first, end up not getting much done and then getting angry at myself for not getting things done. It's a vicious circle.
SO, I have decided to start an ONLY GOOD NEWS series.  Stories that give you hope, will ease the mind and forget what's wrong in the world for a moment. Stories that inspire and warm the heart. No matter how big or small the story...
The oil spill and the sea turtle story. 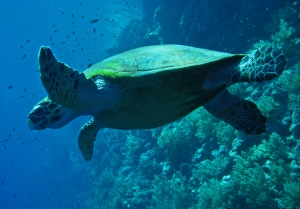 The turtles population at the gulf of Mexico is slowly recovering after the oil spill, according to researchers, during the time after the spill most turtles were covered with oil, and today only few moderately or heavily oiled.  For the Gulf Coast fauna, at least, things are looking up. The seaweed where turtles normally spend most of their early lives is showing much less sign of oil from the spill, where previously the oil was "thick enough to wrinkle," according to Witherington. Small crabs and birds have also returned to the habitat.

The turtles themselves seem to have survived relatively unscathed. Researchers had feared that the crude would cause them skin problems and organ toxicity. Since that doesn't seem to have happened, researchers are no longer capturing turtles that actively seek to avoid them.

"We're confident these animals are doing fine on their own," Stacy of the fisheries service said.


Today, if someone starts talking negative stop them and mention the sea turtles and tell me what they say.

Posted by A Collective Journal at 7:45 AM

It's good to hear the turtles and marine life are returning to the gulf and doing well. Nature really does do an amazing job of renewing and healing itself when left alone.

I also like the idea for your new series. Too many times good news is passed by for the more sensational. Thanks gg.

I spent a good portion of the last couple of days watching 33 miners be rescued, what JOY each time one stepped out of the rescue capsule to the hugs of family and friends.

I found myself clapping and crying for happy....

I did too VE! What an awesome story that is and definitely prayers were heard and answered for all those families.

Love the new series Peggy. I believe we all need some good news. I saw parts of that miners rescue also, and yes, prayers were answered.

Can't wait for next weeks story!