All from a block of wood

My dad started wood carving back in 1976 when he broke his leg in three places and was rather laid up. His first carving was a relief of an eagle done in mahogany.  This first carving came out pretty good and he enjoyed it so much he continued to carve. He did a few more reliefs and then decided to try some figures. One of my favorites (and one that he carved especially for me) was from the book of “Gnomes”.

He traveled around the country working at trade shows and would take a block or two of wood with him and his knives. He would sit on the plane (yes, on the plane!) carving away during his flight.  He most likely would have been locked away if he tried that these days!
He met a lot of people that were curious as to what he was doing, and always came home with fun stories. Sometimes he would even have people wanting him to carve something for them and he would. He would usually barter with them for payment.
A little before Christmas he carved his first Santa, which he presented to my mother. After that he started carving a different Santa for my mom each year. Once they were carved he would  paint them with oil paints and then top them with a light finish. 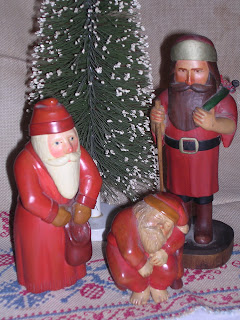 So many of my mom’s friends loved his Santas and asked him to make them one. He always obliged, but my mom would get the very first one. He would pick a Santa from a different country, style or color and adapt it to his carving. Sometimes he would just make his own (like the barefoot sleeping Santa) He also had fun making small ones and could whip them out pretty quickly. He almost always added some little toys to the bags if they were holding one. 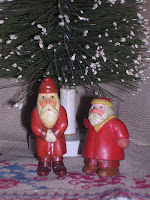 His trademark was carving the feet on his Santas. I think he enjoyed when people would look at them and see the soles of their boots, with little stitches and all. He would sign and date them there also. 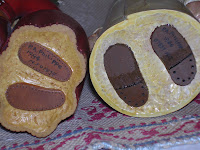 One of the last Santas he made was a Russian Santa all in white. 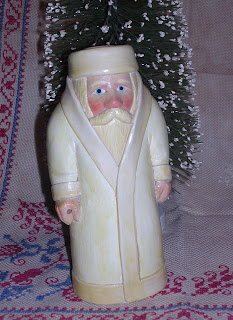 Over the years my mom has given me and my sister some of his Santas for Christmas. This is something that we both treasure.
I hope you enjoy seeing a few of his carvings, and for anyone that knew him if you notice a slight resemblance to him in his Santas, well, that may have been intentional…
(jj)
Posted by A Collective Journal at 5:00 AM

I am totally enthralled with his carvings! How talented he was and how fortunate to have a piece of him to remember him by. No wonder you are so talented. How many pieces do you and your family have do you think?

We have quite a few. He did other things besides Santas, but they are some of my favorites. He enjoyed giving them to friends and family so there are some out and about.
He also carved some old whales teeth that he got years ago, he did some really cool netsuke type carvings with them.

jj, thank you so much for sharing this with us. He was so talented and I enjoyed seeing all the different santas. I'm in awe of those who can carve like this.

These are such wonderful treasures.

Wow, If I saw any of those for sell I would snap them up....and they would be keepers....what a joyful legacy he left for your family...

I think your Dad and my Dad would have been great friends - both enjoying working with wood and all. Those are totally awesome JJ. Thanks for sharing with us.

JJ, The Santas are wonderful. Such memories for your family. Thank you for sharing. Cindy

What a lovely tribute to your father.