Dont be afraid...I am here Bears

Just this past week I have had the distinct pleasure of meeting a very generous woman. Her name is Alaine and she is the founder of a special charity, creating smiling bears for traumatized children. The following is taken directly from an email she sent to me. I have not told her that I am posting this today, and I hope she does not mind me taking the liberty to do so.
So if you have a minute or two, sit back and read a little and check out the website.
I do not knit or sew, but I have passed this information on to my mom so she in turn can spread it through her stitching groups. Maybe one or two of you would like to do the same or even make some of these much loved bears yourself. 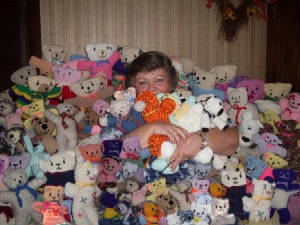 http://dontbeafraidiamherebears.tripod.com/index.html
I started this bear project just about 2 years ago when I became aware of this huge problem we are having in this country with keeping our children safe and protected, and when these organizations have to pull them out of their homes they are so scared and confused.. or when these horrible things happen to them by people who are SUPPOSED to protect them they are a bit comforted.. I tried to think along comforting them as a mother would do and came up with the universal symbol of love "THE TEDDY BEAR" I was going to a support group myself with a woman who ran the Organizations of Grandparents for childrens rights and mentioned it thru tears one time when I was speaking to her and said I wished I could give each child who has to experience being taken away from someone they love or someone that hurts them a teddy bear.. and she said I can make that happen..
Her agency was government funded and had worked on getting laws passed for these children but she had loads of contacts along the way.
The Commissioner of Nassau County, NY, Dr. Imhoff (a wonderful man born in Switzerland who really cares about the undertrodden) mentioned to me a number of times how much easier our bears make his child care workers jobs, how when the children receive a bear, their eyes light up and their crying ceases and the bear is hugged to their chest as their friend and protector… someone they can take with them on this scary journey. Some of these children come from such dysfunctional homes that these bears are the first toys that they have ever had: (That was our first place that gave out our bears. Then we went on to "The Safe House" in Bethpage who takes in victims of domestic violence and sexual abuse, physical abuse etc. a whole floor of the building is for the police end of it and they have a supply of our bears for the children that come into there and put them in their safe houses where no one knows except the people who place people in to keep them safe from these monsters out there....from there the Assistant District Attorney under Kathleen Rice (DA Nassau County) has taken some of our bears into the family courts so that when the children have to retell their story to the judge they have a bear with them for courage and to hold on to, and finally we have given bears to the Child Advocacy Center in Central Islip, NY who do intake on these little abuse victims. We were replenishing bears usually every 3 months because the numbers are so high..
(28-30 children removed from homes EACH month) probably even more now plus children who stay with the non offending parent aren’t even included in that number!
and in the two years we have been doing this and I thought doing as much as we possibly could we gave out well over 1000 bears. Unfortunately the bear making has fallen way back which I am told is normal in a charity… it will ebb and flow... and I wasn't sure if I should keep holding out or just close the charity down.. but I thought well even if I am the only one making bears and only wind up give a few to one organization I cant let these little ones go without now that I know about it.. so I tried to get new members on the Ravelry group which I have succeeded in a few and have gotten some bears already from it and I have spoken to the people at each organization and told them of the people stopping making and sending in bears and of course they are grateful for whatever we have to give them.. so it would be wonderful and quite an answer to a prayer if your mothers stitching group were interesting in our bears.. They can be done in whatever way the person making them cares to, knitted, crocheted, sewn, woven anything, any size, any color etc... the only requirement I have is that they be smiling... to ease a hurting little heart..
Thank you for taking the time to check this out and for letting me spread the word here. . If you would like a pattern, you can contact Alaine through email from the website.
(jj)
Posted by A Collective Journal at 11:57 PM

jj, this is so joyful and tearful at the same time. Joyful that people like this lady care so much and are helping, and so tearful that there are children in such sad situations.

What a great story to promote JJ!

Great post JJ. It's great when we can be aware of such things and maybe get others involved. Hopefully, the word will spread and they will get lots more bears!