Did you know that half of the 110 Pilgrims who had left England in 1620 survived that first year in the New World? In their second year, however, the Pilgrims flourished with plentiful food sources, thanks in large part to the friendship and guidance of an Abnaki Indian named Squanto. 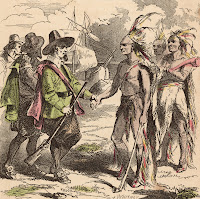 Did you know that the first Thanksgiving feast was celebrated during the Pilgrim's second year in the New World? During the first year, the Pilgrims were nearly decimated by the brutally cold winter.

Did you know that Thanksgiving didn't become an official national holiday until more than 200 years later, when in 1863 President Lincoln proclaimed the last Thursday of November a national day of thanksgiving? 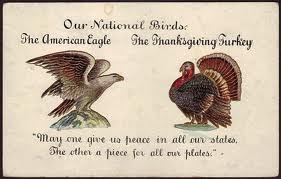 Did you know that it is tradition for US Presidents to issue a pardon to the White House Thanksgiving Turkeys? Since about 1947 the National Turkey Federation has presented the President of the United States with one (and in recent years - two) live turkey(s) in a ceremony known as the National Thanksgiving Turkey Presentation. The live turkeys are pardoned and live out the rest of their days on a farm or, since 2005, sent to either Disneyland in California or Walt Disney World in Florida, where they serve as the honorary grand marshals of Disney's Thanksgiving Day Parade. While it is commonly believed that this pardoning tradition began with President Harry Truman in 1947, the Truman Library has been unable to find any evidence for this. The earliest Thanksgiving Presidential Pardon on record is with President George H. W. Bush in 1989.

Did you know that there is no historical evidence that the first Thanksgiving included turkey, which is, of course, the centerpiece of today's Thanksgiving meal? There was, however, mention of wild turkeys in a book written by Pilgrim Governor Bradford.
Did you know that the most popular Thanksgiving dinner includes a menu of turkey, cranberries, sweet potatoes and pumpkin pie? Then it's only fitting that Americans raise over 256 million turkeys. The biggest producer of turkeys is Minnesota, followed by North Carolina, Arkansas, Virginia, Missouri and California. 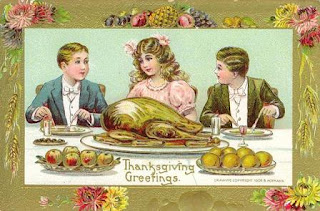 Did you know that Americans raise 649 million pounds of cranberries, 1.6 billion pounds of sweet potatoes, and 998 million pounds of pumpkin?
This  information in this post came from;
http://holidays.net/thanksgiving/index.htm
Wishing you all a wonderful and joyful Thanksgiving day, however you and yours celebrate it .
(jj)
Posted by A Collective Journal at 12:00 AM

Email ThisBlogThis!Share to TwitterShare to FacebookShare to Pinterest
Labels: Thanksgiving

WOW! Terrific post jj. Thanks for so much information about Thanksgiving. Some of these I didn't know and I love the pictures too.

Thanks for the history lesson!
I am an information junkie so this is wonderful :)

Amazing to read how some traditions begin. I learn so much over here. Thanks for such a great post.

Happy Thanksgiving to one and all!

I had a flashback to school days. All I can remember is the Indian named Squanto. ha!